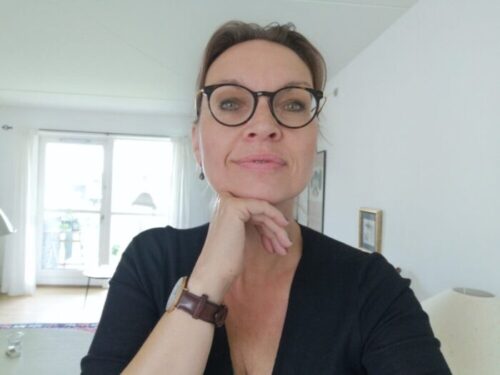 She has always been a workhorse. But as the first signs of menopause begin to show, she can barely recognize herself. Journalist Dorthe Oxgren almost smokes from one day to the next in a carousel of symptoms, such as trembling in the body, nausea, dizziness, anxiety and insomnia. She just got a job in a media house. A place she knows from the past and is hugely happy to return to. But just 14 days later, she has to say goodbye to her colleagues, never to return again. “I went home from work on Friday because I was exhausted and flu-like. On Sunday, it all gets worse. I am suddenly overwhelmed by monster anxiety. It all develops in a matter of hours. Everything is getting on my nerves. It is as if the nervous system has been ripped out of the body and laid out on the clothes. It’s just getting worse and worse. I dare not be alone with myself, and can feel that it is a whole new feeling that I can not recognize. I get scared and lie in a fetal position and shake, ”she says.

Dorthe has previously been on sick leave for two months from another job because she has pain in her jaw. The doctor assesses that the jaw pain is related to stress. But this time, the doctor chooses to refer Dorthe to a psychiatric emergency room. They believe she has a stress syndrome, which is psychiatry’s way of describing stress. She is given strong nerve medicine and is sent home. But nothing helps, and Dorthe still feels bad. She smokes back in psychiatry for a seven-week outpatient course consisting of talk therapy and a short transition with antidepressant medication. During the course, she manages to contact a naturopath, who asks if it could be conceivable menopause. But it rejects Dorthe, who associates menopause with the cessation of menstruation and hot flashes. Especially because she’s still menstruating. After seven weeks in the psychiatric system, Dorthe is sent home even though she says she does not feel well. She therefore chooses to contact the naturopath again, who recommends a number of vitamins and changes in diet. The naturopath estimates that it will take two months before Dorthe begins to see signs of improvement. After three weeks, Dorthe can sit behind a computer screen where she has not been able to read or write before.

During the course, Dorthe receives a dismissal notice from the media house after three months of illness. Something she fully understands. “I get rolled into the job center mill, and am really positive about it, because I want to work. The idea of ​​writing a book has been pushing itself for a while. Fortunately, I get a good job consultant who is with the idea. I get an office where I can initially only be for an hour. But slowly it gets better. I am training myself to go to work again. I had by no means been able to go out and take a part-time or full-time job at that time. It’s completely like learning to walk again, ”she says. During her research for the book, Dorthe gets a lot of aha experiences. She finds out that her hormones have been at stake during the perimenopause, which is the prelude to menopause. “Some women slip through menopause, where they just stop menstruating, while others get the big turn. Someone like me took the whole trip with his nose in the asphalt. And then there is a large middle group who have moderate symptoms. There is a very big difference in how we react to hormonal changes ”.

A rest on the couch

Today Dorthe gives a lecture on menopause. She meets women who have been “pushed out of the labor market” because they have not been able to handle being at work during the years of menopause, and have to be supported by their partner. “I doubt that in all workplaces you can go to your employer and say that you are in menopause and meet understanding for it. Women our age are skilled and experienced and have plenty to offer in the job market. But we need to be able to immerse ourselves in work tasks and work undisturbed in some phases of life. We should be able to go to our employer and say I need to go to bed in the middle of the day, where can I do that? I have some of these days, give me some rye bread assignments where I do not have to think the big thoughts. The nervous system becomes active very quickly when one is in menopause. Imagine all the bumblebees and bumblebees around you, and people talking on the phone in a large office ”.

Journalist and lecturer Dorthe Oxgren cannot lead a normal working life because her menopause is a gigantic slide. She will have to find other ways to make ends meet financially.

But nothing helps, and Dorthe still feels bad. She smokes back in psychiatry for a seven-week outpatient course consisting of talk therapy and a brief transition with antidepressant medication.

She has always been a workhorse. But as the first signs of menopause begin to show, she can barely recognize herself.

“Some women slip through menopause, where they just stop menstruating, while others get the big turn. Someone like me took the whole trip with his nose in the asphalt. And then there is a large middle group who have moderate symptoms. There is a very big difference in how we react to hormonal changes ”.